I have been debating about weaning my toddler for quite some time, probably about a year.  I have resisted the urge, for a multitude of reasons:

* I am lazy, and giving up the easiest mothering tool ever is hard work

* The subject of tandem nursing caused a huge “scandal” in my circle of friends when my husband was first introduced to the idea and permanently affected not only friendships but my view of many things, including breastfeeding advocacy.  It was a traumatic-to-me event during a very vulnerable time, which made me feel like I *must* tandem nurse to “prove” something about my husband.  Yes, this reason is completely unreasonable and stupid, but it’s one of my reasons, nonetheless. (I also didn’t realize that this was one of my reasons until I sat down to write them out!)

* Ask around about tandem nursing…from those who do it or intend to…and the common refrain (that I’ve heard/read) is: “It’s lovely!”, “I’m so glad we chose this, it’s so wonderful!”, “When my kids are nursing, rainbows form in the sky while unicorns dance!”  Okay, so I made that last one up, but you get the idea, right?  This has NOT been my experience, at all, and it is really hard to admit (both to myself and to others) that I just really don’t like nursing both of my kids.

I’m sure there are more reasons I could come up with, but these are the first ones that came to mind.  I’ve come to think that perhaps it may just be toddler nursing, as opposed to tandem nursing, that I dislike….but it really doesn’t matter, the point is: I’m done.
In case you’re wondering, here are some of the reasons I don’t want to nurse two kids anymore:

* This feeling of not wanting to nurse the toddler anymore started in 2010, when I was pregnant and had a miscarriage.  C nursed through the entire thing, almost obsessively.  Maybe the milk tasted differently?  While, logically, I knew that it was a good thing for him to nurse, that it was probably helping my uterus clamp down and avoid bleeding too much, it was emotionally upsetting.  I kept thinking that if he would just stop, maybe the little baby-start wouldn’t leave my body and everything would be okay.  (I even briefly convinced myself that maybe there were twins and one was still inside, growing away.)  As much as it pains (and embarrasses) me to say, I was angry with C.  I was angry that he needed me so ferociously at a time when I felt I had nothing to give.  Duh!  Of course he nursed a lot, it was basically the only form of mothering he was receiving while I was so upset (insert large amount of mommy guilt here).

* I often end the day feeling as though I’ve been assaulted.  Seriously.  This feeling, no matter how ridiculous, is not a healthy way to feel about my child.  He has stuck his hands down my shirt, up my shirt, unbuttoned my bra, squeezed my boobs, hit me when I’ve said no…the list goes on.  I DON’T like it.  Not one bit.  I have discussed, until I’m blue in the face, appropriate and inappropriate behavior for nursing.  It hasn’t helped.

* When I was pregnant with M, we night-weaned.  Even though it’s been almost two years since I’ve consistently nursed him at night, he still wakes up asking to nurse, sometimes more than once a night.  I recognize that he may still wake up, but hopefully he’ll stop yelling loudly “I wanna nurse you!”

* I’m tired of being “touched out”.  I was completely unprepared for just how much physical contact was going to be involved with nursing two kids.  There is *always* someone on me, someone touching me, someone nursing or wanting to be nursed.  It is too much.  I feel depleted and when they go to sleep, I want to lay in the bed (or on the couch) BY MYSELF with a five foot radius of nothing around me.  This is great, except when you take into account that I have two other children who are patiently waiting for their turns to have me to themselves…and the husband.  While none of them take as much nurturing as the two little ones, I feel like there’s just not enough of me to go around.  I need some of that back.

* I want to have orgasms.  LOTS of them.  I want to enjoy sex with my husband and that involves my breasts.  This may sound selfish, but trust me, I am a MUCH better mother when I’m fulfilled in this department.  Unfortunately, that “touched out” feeling extends over into the bedroom and leaves me less-than-enthused about having even more touching.  I have never had this issue before, and I can only conclude that the difference is the extra nursling-child. 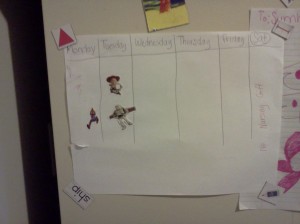 Thrown-together chart. More space during the days might work better, as we're doing a sticker every time he asks to nurse.

We spent time discussing what kind of prize he would like, something that would be for him only and that was something only “big” boys could do (not little nurslings).  He and his older brother often play the Lego video games together, but he has yet to have his own game, so he decided that’s what he would like.  And so it began!

16 thoughts on “Operation No More Nursing”